Is John Wick Plugged into The Matrix?

First things effing last: Have you seen John Wick AND The Matrix? It doesn’t matter if you’ve seen John Wick Chapter 2 or the other perceived turds that are the sequels to The Matrix. Personally, I love the sequels, but that’s neither here or there. If you’ve seen them both – great. If not, check out the recaps John Wick here; The Matrix here. You can also read my off the cuff recaps below. Might want to check out the links, though.

So, The Matrix is such a pop culture staple that it needs little explanation. Humans built machines. The machines took over, but realized the best energy source to continue running the machines were humans. They plugged these humans into the matrix to keep them alive so that the machines can suck their energy out of them. They realize that they can’t just keep the humans alive, though, because reasons. They (the machines) begin creating lives for the humans inside their head to keep them happy. Not just happy, they’re based in reality. They tried to run a simulation that is exactly like real life because we humans could identify the simulation if it was too full of rainbows & lollipops. Every once in a while a human would be unplugged from the matrix by the human resistance to fight against the machines. Keanu Reeves played Neo, a Christ-like character who had been foretold to come & free all the humans from the bondage of the machines. There, if you haven’t seen it now you have the gist.

John Wick is a revenge tale focusing on a former mob hit man whose wife has just died AND the dog she bought for him as an emotional replacement is killed by the same mobsters he left behind to live his perfect life with the wife that has just died. Get it? The wife & dog are connected emotionally for Mr. Wick & when the son of the godfather kills the dog he loses his shit and rips through the entire mob to kill everyone involved. It’s a really badass movie. WATCH IT.

Now, when you watch John Wick or if you’re planning to watch it again I want you to keep a few things in mind. It makes it that much more fun. Well, it did for me anyway.

1) The world of John Wick might actually be one of the simulations the machines are running within The Matrix. 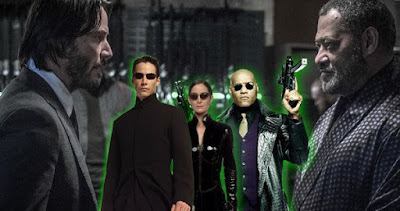 In The Matrix there are thousands if not millions of humans plugged into the grid. They’re like so many rechargeable batteries in towers that resemble stocks of corn. These humans are not stolen from their parents & plugged in. They’ve been built in petri dishes using DNA collected form humans long ago. Presumably, anyway. I haven’t checked the cannon for The Matrix, but it has to be something like that.

So, it’s logical to think that there would be identical humans that are plugged in to the grid which look the same, talk the same, act the same – because they’re the same genetically. The only difference is they might be running a different simulation. So in The Matrix, Neo (Reeves) was a shlubby IT guy who was living a pretty boring life when he’s unplugged & realizes his “life” has been spent as a battery. But in John Wick, he (Reeves) has not been unplugged yet. He’s running around in a simulation being a badass with an amazing shot. He has not yet been unplugged. He’s just lucky that his simulation is so much better than Neo’s for some reason.

2) John Wick is a tactical god just like Neo became.

There is no arguing this. His friends & enemies refer to him as Baba Yaga, basically a Boogey Man who cannot be stopped. He never seems to miss his target & every move he makes is the most efficient. It’s almost as if...he can see what’s going to happen before it actually happens. This is something Neo learns how to do in The Matrix.

Not only that, but Wick never seems to be all that tired. Everyone recalls the moment Neo realizes he’s not actually breathing air while plugged into the matrix. He’s just laid back in a post-apocalyptic dentist chair plugged into the simulation. He’s not ACTUALLY fighting anyone. Perhaps this is what is happening to Wick. Why would he be out of breath or tired it he’s plugged in somewhere, just chilling in one of those battery-charging pods? And where do you suppose he got those skills? I suppose he could be ex military (as implied by him wearing his watch on the inside of his wrist, or you know - his skills), but I like to think he downloaded it - a la Neo.

In some scenes it's almost like Wick is dodging the bullets.  Reminds you of something, doesn't it? 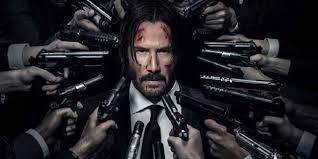 4) The director was Keanu’s stunt double in The Matrix.

I’m not entirely sure how that relates to my rock solid theory, but it is too cool not to be included. The man goes from being Keanu’s stunt double to directing him in his career renaissance.

5) Marilyn Manson is featured heavily in both soundtracks.

In John Wick it is “Killing Strangers” which is played at multiple points in the film. In The Matrix it was “Rock is Dead”. Clearly the machines love them some Manson.

6) Laurence Fishburne shows up in Chapter 2.

Now, I haven’t seen Chapter 2 yet because I live in a small town & for some reason the theater doesn’t want to make money so they didn’t play it here. That hasn’t stopped me from watching the trailer over & over again, though. Laurence Fishburne’s Morpheus is the one who showed up in The Matrix & revealed to Neo that he was plugged into the simulation, giving him the choice of the red or the blue pill. From what I’ve seen in the trailers, Fishburne appears to be someone who is going to rock Wick’s world perhaps as much as Morpheus did Neo’s. (This part is subject to change once I watch Chapter 2, but obviously just the appearance of Morpheus in the film lends to my silly fan theory.)

According to IMDB, during the safe house scene the character's user name displayed in the top right is, 'Neo'. This is a reference to Keanu Reeves' character in The Matrix trilogy.

8) An Agent from The Matrix makes a cameo in John Wick. 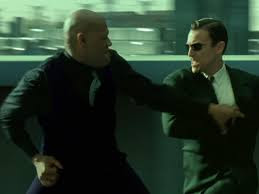 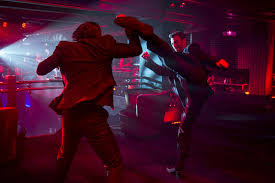 The only aspect that I couldn’t get passed was the fact that I didn’t see any agents in the background doing anything Agent-y. That is until I reviewed IMDB while watching for the 5th time & noticed Agent Johnson himself was not just hanging out in the back ground being menacing. He (actor Daniel Bernhardt) is disguised as Kirill, the head of security for Viggo. He is the only one to meet John Wick in hand-to-hand combat and come out the victor. He actually throws Wick from the balcony of the club onto the dance floor, causing Wick to book it out of there before (I’m assuming) Kirill went all Agent-y on him & glided down onto the dance floor or took over another patron's body to finish him off. So there you have it – an agent confronts John Wick within the matrix & severely wounds him.

I’m sure if I was really looking there would be plenty more to prove beyond a shadow of a doubt that John Wick is plugged into The Matrix, but I’m interested in hearing any theories you might have to support mine. Go ahead & chat it up in the comments section below.